The Thai capital braced for a protest Monday by antigovernment demonstrators who gathered to block intersections in their latest bid to force Prime Minister Yingluck Shinawatra from office and scuttle elections scheduled for Feb. 2. Government opponents from areas outside the capital trickled into Bangkok on Sunday to reinforce crowds mustering at the sprawling city’s chokepoints.

Authorities issued an order prohibiting protesters from entering the locations, a possible prelude to stepping up security measures, but protesters were already occupying some of them and showed no sign of leaving.Tensions have been building in the run-up to what protest leader Suthep Thaugsuban has billed a final showdown to drive out Ms. Yingluck and to install a nonelected government to carry out what he says are needed political overhauls. That is necessary, he says, to eradicate a pattern of corruption and vote-buying from Thai politics before another election can be held.

Mr. Suthep calls the prime minister a front for her brother, self-made billionaire Thaksin Shinawatra, a polarizing figure in Thai politics for more than a decade. Mr. Thaksin was ousted as prime minister in a coup in 2006 and lives in self-imposed exile in Dubai, evading a prison term in Thailand for a corruption conviction he says was politically motivated.

Mr. Suthep has shown the ability to draw protest crowds as large as 150,000 people, mostly drawn from Bangkok’s middle classes and backed by the country’s royalist and bureaucratic elite. The Shinawatras and parties supporting them have won the past five elections with overwhelming support from the poorer, heavily populated countryside, where their policies to reduce poverty have been popular.Mr. Suthep told a rally on Sunday that he refused to negotiate or compromise. “The only thing that we the people want is to get rid of Thaksin regime from Thailand,” Mr. Suthep said. “We’ll either win or lose in this battle. There’s no draw.”

The government said it would deploy as many as 15,000 police officers and soldiers to ensure security and prevent clashes. Authorities have prepared contingency plans to help Bangkok residents cope with disruptions to traffic and government operations. At least one million commuters are expected to be affected.

‪The protests will hit some of the capital’s busiest shopping and hotel districts. Help desks and call centers have been set up to guide tourists around the protests and navigate traffic. Some hotels in the targeted protest areas have started offering discounts for guests. In some cases, guests were moving to other hotels in areas that will be less affected.

Ms. Yingluck has refused to step down and last week said she was concerned that groups may take advantage of the unrest to instigate violence. Eight people have been killed and scores injured in clashes and shootings over the past several weeks. On Saturday, seven people, including bystanders, were hurt when unidentified gunmen opened fire near a rally site at Democracy Monument in central Bangkok.

The “Red Shirt” group, allies of Ms. Yingluck and her Pheu Thai Party, have resisted direct mass confrontation with Mr. Suthep’s supporters. They plan to gather on the outskirts of Bangkok and other provinces to show support for the elections, which pro-government parties would be widely expected to win.

Whether the elections will be held as scheduled Feb. 2 is uncertain. On Sunday, the Election Commission, an independent body charged with organizing the polls, recommended that the government postpone them. Twenty-eight constituencies in southern provinces, a stronghold of the protest movement, have been blocked from registering candidates, which could mean the vote would fall short of the 95% of seats required to be filled in the 500-seat House.

Ms. Yingluck on Sunday didn’t comment on the recommendation. However, her deputy Surapong Tovichakchaikul urged the commission to perform its duties and make sure the Feb. 2 polls can go ahead.

Bangkok has swirled with speculation that the mass rallies Monday could trigger violent confrontation that could force the army to intervene. Army commander Prayuth Chan-ocha said Saturday that the army is concerned about the prospect of violence but said it wouldn’t stage a coup.

In recent days, small groups have come forward to call for the antagonists to make peace and end more than a decade of division that has led to repeated bouts of turmoil. In 2010, more than 90 people died when security forces quelled the occupation of central Bangkok by Red Shirt protesters.

‪”I’m running out of patience,” said Prawet Thichon, 49 years old, who owns a cellphone shop at MBK, a shopping mall in downtown Bangkok. “It’s been two months and now the protesters are going to shut down Bangkok. There’s no end to it. I want this to be over. I want everyone to be safe. No more loss.” 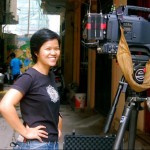